Ed’s Fly Shop and Yampa Valley Anglers are hosting Fly Tying Night at Townies. The first Fly Tying Night at Townies will be Wednesday, January 24th at 6:30 PM at Townies. Tim Drummond, Umpqua Feather Merchants Signature Tier, will be demonstrating one of his very own signature flies, T’s Stone. After the presentation, material kits and tying instructions will be available for those who would like to tie the pattern at home. Townies doesn’t offer food; however, they have graciously offered to extend their happy hour on drinks for those who would like to enjoy a beverage while watching Tim tie.

T’s Stone was originally invented for the North Platte near the North Park area. Tim has also used this fly in the Roaring Fork Valley and Yampa River with fantastic results. Tied with a tungsten bead, this fly gets down quick in the fast stuff where fish often gorge on stones. The splayed mottled rubber legs give the impression the stone has lost its grip and is now drifting freely. Ostrich hearl in the fly brings the pattern to life, as well as the iridescent back which is put under the wing cases to tone down flash while still remaining effective. 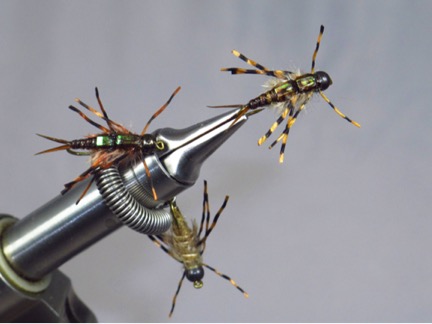